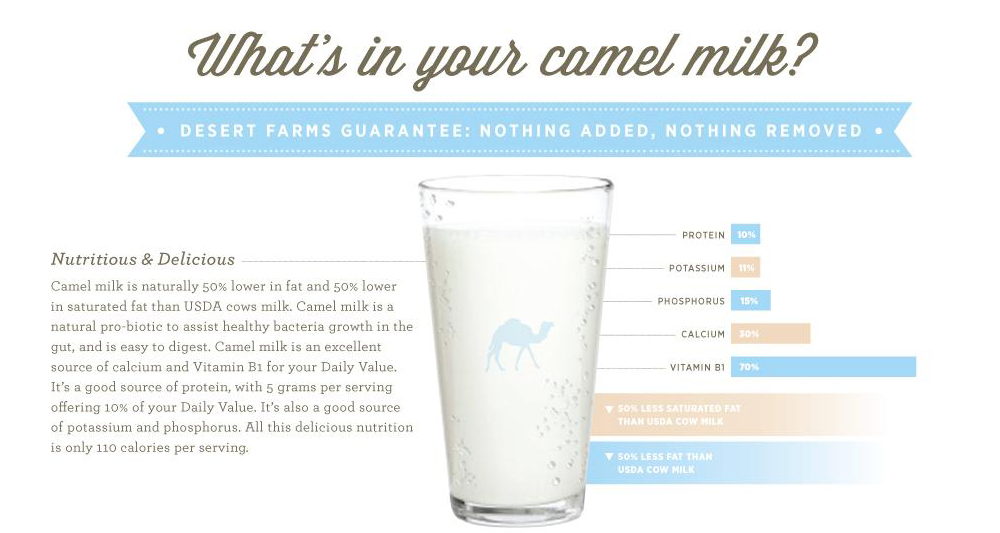 Along with having nutrients like vitamin E, zinc, and selenium, a single cup of camel milk also contains:

For centuries, Middle Eastern, Asian, and North African cultures have used camel milk as a natural remedy. Nomads and Bedouins still rely on its nutritional and medicinal properties to this day. Entire tribes have lived on the benefits of camel milk entirely or with few other foods (like dates) for months in the harsh desert climate — without any apparent loss of health.

The United Nations hailed the nutritional value of camel milk in 2006 and predicted higher consumption once it became easier for consumers to buy. Now you can buy camel milk from Desert Farms, produced right here in the US.

Camel milk tastes just like milk — because it is milk! It does have a distinctive taste — slightly salty, some say, but also smooth, refreshing, and fulfilling. People are surprised when they first drink it, because they don’t know what to expect. But in many cases, it becomes something the whole family can enjoy. Our camel milk is light, sweet, and clean with a fresh taste. It might differ a little from farmer to farmer depending on the local camel diet and the stage of lactation. There is nothing added and nothing removed. In addition, our partner farms conduct regular lab testing for bacteria and pathogens before packaging.

If you have picky kids — or you ARE the picky kid — add some chocolate or strawberry syrup to a glass of camel milk, sprinkle it with all-natural stevia, or make a smoothie with your favorite fruit. The taste grows on you, and you’ll find yourself craving camel milk when you feel tired, hungry or just need that extra-healthy feeling!

Why does it cost more than that homogenized, de-fatted, vitamin-added blend of cow milks on your grocery store shelf? Well, we’re outnumbered! There aren’t that many camels in the US. Their pregnancies last longer than a humans’ (around 13–14 months), and we don’t have a lot of advanced camel breeding technology in the US yet like they do in the Middle East.

For now, our camels are found in small family dairies in the Midwest with new milking programs set to open in the West. Most dairies have only between two to 20 camels, with each milking camel producing around five liters per day. So don’t spill your bottle!

Where to Buy Camel Milk